My husband and I bought a bungalow in Hastings, Ontario Canada, in 1997. From the day we moved in there were strange banging noises on doors and walls, electrical problems and once, as I was walking into the furnace room, the door slammed in my face. The house was built in 1950 and although it was rented out for a couple of years, it had remained in the original builders family, until the last member died and we bought it from the estate. We were told by friends of the family that at least three of the previous owners had died in the home.

After the sudden death of my husband in our home, in 2002, the unexplainable incidents escalated dramatically.  People  witnessed white and black shadows, that seemed to glide into empty rooms; mattresses bounced, as if someone were jumping on them; there were louder and more frequent knockings on walls and doors, as well as several other strange occurrences, all of which seemed to get worse when there were overnight guests.

When I started capturing strange anomalies in photographs, taken in different rooms of the house, I began to think maybe there is a way to prove a haunting. So for several months I continued taking pictures around my home, with some amazing photographic results.

With so much going on there, I decided to increase my chances of getting  proof of the souls survival, by forming a group of "investigators", who would go out to local reputedly haunted sites. Some of these locations were dark and spooky even on the sunniest days, but the photographic results were amazing! 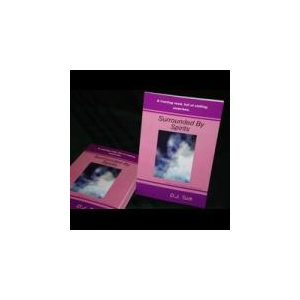 Surrounded By Spirits; Visitors From Beyond

Surrounded By Spirits; Visitors From Beyond